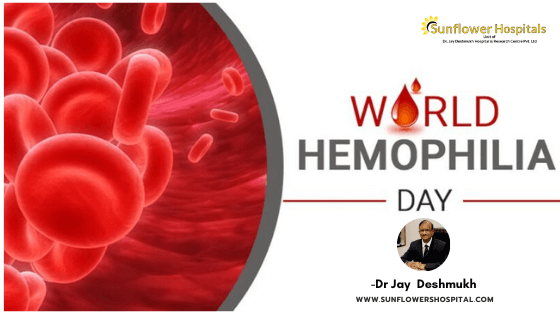 April 17 is celebrated as World Haemophilia Day. lt marks the birth anniversary of Frank Schnabel, the founder of the World Federation of Haemophilia. Awareness-raising campaigns, conferences and workshops are organised on this day. Many landmarks and monuments around the world change their colour to red in the night to support World Haemophilia Day.

It is an inherited bleeding disorder. The blood does not clot properly. This leads to uncontrolled bleeding after surgery or injuries. There are many blood clotting factors that help us to stop bleeding. Essentially these factors promote clotting of blood. People with haemophilia have a deficiency of either factor VIII or factor IX. The lower the levels of the factor, the more likely it that bleeding will occur. This can lead to serious health problems.

Haemophilia is caused by a mutation or change in one of the genes. These genes give instructions for making the clotting factor proteins. These clotting factors are responsible for blood clotting. These genes are located on the X chromosome. Males have one X and one Y chromosome that is XY. Females have two X chromosomes that are XX. Females inherit one X chromosome from each parent. Hence haemophilia is predominantly an inherited disease of men. This is because they inherit the X chromosome that has a mutation in either factor VIII or factor IX gene. Even though haemophilia runs in families, some families may not have members suffering from haemophilia. Sometimes there are females who carry the gene in the family, but no affected boys. Daughters have two X chromosomes one from each biological parent. So even if a daughter inherits the hemophilia mutation and becomes a carrier, the other X chromosome can provide normal clotting factors.

What are the different types of haemophilia?

What are the common signs of hemophilia?

Swelling and pain in the knees, elbows and ankles is common. This occurs due to bleeding in these joints. There could be col-lection of blood in muscles or under the skin. Bleeding may not stop after dental extraction. There can be bleeding from gums or mouth. Frequent and hard to stop nasal bleeds, bleeding after circumcision, bleeding in urine and stools could be due to hemophilia. Bleeding inside the skull or inside the brain is also an important manifestation.

How is hemophilia diagnosed?

How is hemophilia treated?

The main treatment of severe hemophilia involves the replacement of the specific clotting factor intravenously. Replacement dotting fac-tors can be made from donated blood. Similar products called recombinant clotting factor are manufactured in a laboratory and are not made from human blood. Exercising regularly, but avoiding high impact exercises, avoiding blood thinners and certain pain killers. Practise good dental hygiene and protect your child from injuries.

What are the prophylactic therapies under consideration?

How can hemophilia be prevented?

At this time, there is no way to prevent hemophilia in someone who inherits a defective gene and thus has too little clotting factor. If someone has hemophilia in the family, then the person can be tested to see if he carries the defective gene and can have genetic counselling to assess the chances of children with hemophilia. As of now, there is no cure for this bleeding disorder. Proper vaccination, avoiding injuries and a well controlled regularised lifestyle is sug-g e s t e d. Genetic counselling is required to prevent transmission of this disorder in the next generation of the diseased individual.