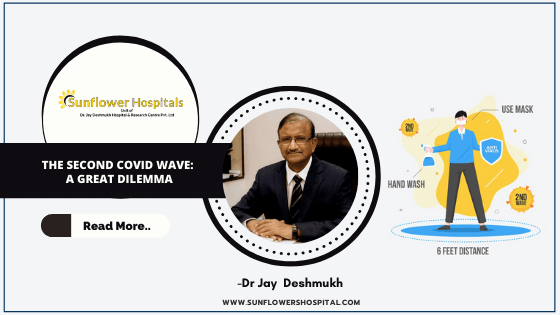 In the last two days, the number of individuals who tested positive in our country was more than 60,000 per day as against less than 30,000 in the previous days. The worst affect-ed state has been Maharashtra. This new second wave is expected to last for 100 days, reaching a peak in the second half of April.

How is the second wave different from the first wave?

The spread of the virus is more rapid in the second wave, particularly in Maharashtra. The number of people affected and their requirement of Oxygen, Remdesivir, Tocilizumab and higher antibiotics for secondary bacterial infection is much more. The death rate is also slightly more. The duration of hospitalisation is also more.

Why has this happened?

Do lockdowns help in containing the virus?

Localised lockdowns have not resulted in controlling the spread of infection as visible in states like Maharashtra and Punjab. The cases and death both seemed to be unaffected with lockdown or restrictions imposed. Death rates and new cases continue to rise as is clearly visible in many states and even in districts except in Amravati.

What is the correct way to move forward?

Vaccinating the largest number in our population in the shortest possible time is the only answer. Wearing a mask, sanitiser use, hand washing and social distancing certainly helped, but could not prevent the second massive wave of COVID infection.

What is the current status of vaccination in India?

The current daily production capacity of Covishield and Covaxin is around 52 lakh per day. India has the capacity to increase the daily doses to 1 crore per day from the current 34 lakhs. If more people are willing to take vaccines, the daily vaccine inoculation can be increased to 90-45 lakhs from the current maximum level of 34 lakhs. Then all people above 45 years can be vaccinated in 4 months and the entire population in a year and nine months.

if we succeed in our production of vaccines and vaccinate all people above 18 years in the next 3 months, we are likely to overcome this wave and prevent the third wave. Let all high schools and colleges open. All should be vaccinated before entering the premises. Let malls and hotels open and entry to be restricted only to those who have been vaccinated. Allow travel in public transport only to those vaccinated.

How to know or confirm that the person has been vaccinated?

Besides carrying a certificate of successful vaccination, let an indelible ink be used on fingers as being marked during the election process.

Have we failed to prevent the second wave?

We did not expect the second wave to hit us so severely. An increasing number of social gatherings like receptions and marriage functions were our undoing. A sense of COVE/ fatigue is set in. We took the 1965 and 1971 and the recent Kargil war seriously, as it should have been taken. It seems the war against coronavirus lacks that zeal, enthusiasm and public participation, though the death rates are much much higher.

What is the dilemma then?

The second wave is amidst the elections in other states that would increase the vulnerability of the people. Whether summer would increase the COVID cases exponentially and whether the health system is capable enough to handle this! In view of economic slow down whether the lower middle class and poor people would be able to sustain the cost of treatment in the second wave.

Is this the last wave or we would be seeing the third wave by November or December?

Are we on the right path as far as the management of the second wave is concerned?

Well, there were many lessons we could have learnt from the first wave. In fact, we could have lessened the impact of second-wave by the early and aggressive vaccination process. Opening up malls and worship places could have been delayed. However, with their limitations, the health authorities have done a commendable job so far:

Is our template of management of coronavirus impeccable?

It is time we relearn the whole situation. We should study what other countries in our neighbourhood did to prevent or reduce the impact of the second wave. The present situation in Maharashtra is very alarming. Decentralising the present decision-making process against coronavirus and greater public-private partnership is the key. Let the authorities have vaccination centres near bus stands, railway stations and airports and in markets and malls. Let all family physicians, private clinics and hospitals also are given the responsibility in the vaccination process. Let early, rapid and numerically more vaccination be carried out.