IS THE PHENOTYPE DIFFERENT IN SOUTH ASIANS? 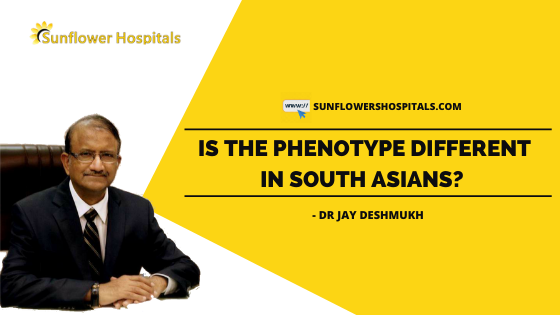 PHENOTYPE :- world’s 20% of the population Is from South Asia. V V This region includes three of the most populous countries of the world. South Asia also forms one of the epicentres of diabetes. According to the International Diabetes Federation, more than 70 million people in this region are diabetics. Being, Thin Outside Fat Inside (TOFO, abdominal and truncal obesity is an important characteristic of the Indian population.

What are a genotype and a phenotype?

A genotype is your complete genetic identity. This is heritable. This is your unique genome revealed by personal genomic sequencing. It also refers to a particular gene or set of genes carried by an individual. Phenotype reflects your physical appearance. This includes your body frame, height and weight, eye colour and other physical Ohara°. teristics. Most of the tbs• eases occur due to an interaction between the genotype and the environment. The phenotype is influenced by environmental and lifestyle fac. tors.

Obesity and metabolic syndrome are important characteristics of a middle-aged Indian. What are the causes?

Rapid economic, demographic and nutritional changes occurring in India contribute towards a sedentary lifestyle. This leads to obesity and metabolic syndrome. What are the phenotypic features that contribute to this abnormal metabolism? Despite lower average weight or body mass index (BMD, Indians have a higher percentage of body fat. This is more prominent on the abdominal wall and inside the abdomen. As compared to Caucasians or Blacks, Indians have lower muscularity, there is more of abdominal obesity.

What about rural to urban migration?

This also causes the nutritional transition, an increase in sedentary lifestyle and abdominal obesity. These activities along with the genetic and phenotypic factors, resulting in obesity, insulin resistance, the metabolic syndrome, Type 2 diabetes and cardiovascular disease.
What are the interventions required to reduce diabetes and cardiovascular diseases in our population particularly in the younger age? Basically the interventions are required to

IS THE PHENOTYPE DIFFERENT IN SOUTH ASIANS?

What are the components of a healthy lifestyle?

Avoiding tobacco in all forms, restricting alcohol, reducing salt and sugar intake and having a low-calorie food to prevent obesity is all that matters.

What about stress, anxiety and depression resulting in an increased incidence of metabolic abnormalities?

Yoga, meditation and aerobic exercises are necessary to have a healthy mind. Excess stress and anxiety lead to increased heart rate, high blood pressure and abnormal lipids in the blood. Excess anxiety and depression also lead to overeating, obesity and an increased incidence of diabetes and hypertension. What are the implications of South Asian phenotype of type 2 diabetes? This is leading to a high incidence rate of diabetes, the occurrence of type 2 diabetes at younger ages and at lower BMI. This is also leading to faster progression through the stages of pre-diabetes. The epidemic of diabetes and cardiovascular illness is also spreading to rural areas and in the lower socioeconomic classes. This is also leading to relatively early loss of insulin because of reduced beta-cell functions of the pancreas.

What about Asian pheno-type in Cardiology?

The Brugada syndrome in which sudden death is reported is considered as an Asian phenotype. In this, an individual can suddenly collapse due to ventricular arrhythmia precipitated by fever, alcohol or with certain medications.

What about Indian pheno-type in Joint disorders like systemic lupus erythema-mitosis and in respiratory medicine?

SLE occurs at a younger age in Asians and has a greater propensity to involve the kidneys and brain. While westerners have more of venous thromboembolism. Obstructive Sleep Apnoea is observed even in non-obese Indians as compared to their western counterparts. Diabetes causing kidneys involvement is more common in South Asians than in the Western population. There is an increasing awareness amongst researchers and health care providers of the typical Asian phenotype that can influence the presentation of a particular illness. Asian pheno-type applies across many different aspects of medicine. More emphasis should be placed on studying its impact on diagnosis, treatment and clinical research.