HOW TO PREVENT SUICIDE 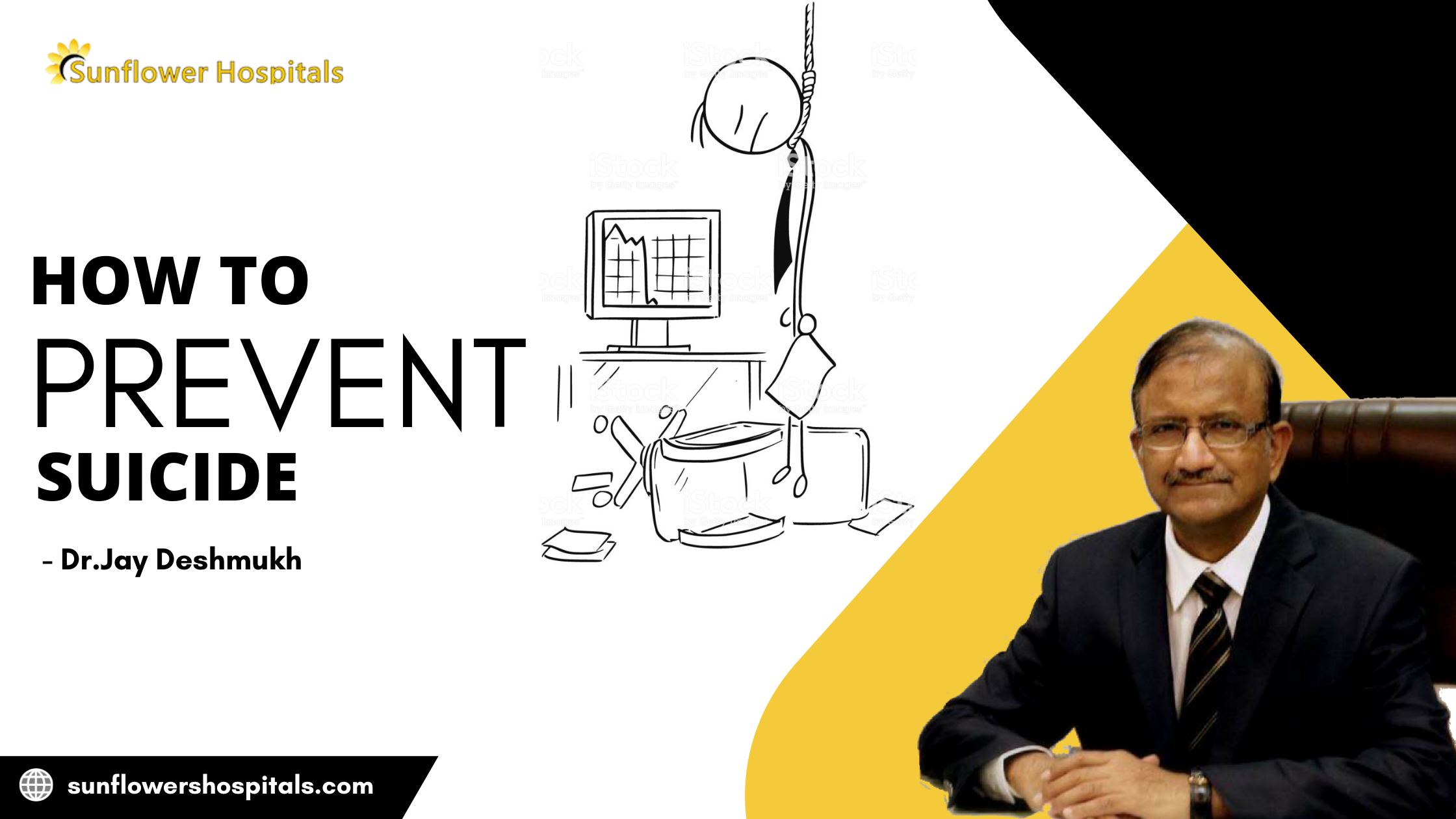 Dr Jay Deshmukh MD. FCPS, MNAMS
hat is common with Viveka Babajee, Pratyusha w V V Banerjee, Nafisa Joseph, Silk Smitha, Guru butt, and Sushant Singh Rajput? They were all financially better than an average Indian, very well known pan India, all very good looking and made their way up in life with great zeal, hard work, and ambition. The common thing with them was that they left this world on their own by taking the extreme step of suicide. They left behind their near and dear ones totally shocked and tearful. We need to educate ourselves and others about many medical and psychotherapeutic treatments available to reduce and eliminate symptoms that increase the risk of suicide. Remember failure is not a crime. Even the great Sachin Tendulkar got out on a duck a few times. Suicidal thoughts should not be considered as a social stigma. Open up and let all know about your feelings. Depression is a part of the imbalance of neurotransmitters in the brain. Medications help to set them correctly. Do not be shy to see a psychiatrist. Do not stop the treatment of depression on your own.

What is the incidence of suicide worldwide?

In an article published in Lancet in 2016, more than 8,00,000 people die by suicide every year. Of this, only 25% of individuals had some interaction with psychiatrists in the year of their suicide. The most common methods used were pesticide ingestion, hanging and firearms. What are the risk factors that increase the risk of suicide? The risk is more if there has been a previous suicide attempt. One of every 100 suicide attempt survivors will die of suicide in one year of their index attempt. The risk of ‘completed suicide is greatest in patients with schizophrenia, tulip°. lar major depression and bipolar disorder. Unemployment and financial strain increase the risk of suicide.
What about psychiatric disorders? Psychiatrist illness is a strong predictor of suicide. More than 90% of individuals who have attempted suicide or successfUlly ‘completed suicide’ have had a psychiatric illness. Hopelessness is associated with suicidal ideation and behavior.

What about marital status and suicide?

Suicide occurs more in those who are not married than those who have. The risk is almost two times more unmarried than married. Marriage increases social integration and meaning within one’s life. What ate the other risk factor Suicide is greater in the unskilled environment than those with skilled jobs. However, in skilled occupations physicians may be at increased risk of suicide. General chronic medical illness including cancer increases the risk. Individuals suffering from pain, some neurological illnesses are more predisposed. Adversity in child-hood like sexual abuse, physical abuse, emotional abuse, and physical neglect are also responsible. Media reports of suicidal deaths particularly of celebrity suicides are known to increase suicidal deaths. The US Foods and Drugs Administration has issued a warning that patients aged 18 to 24 years should be informed about the risk of becoming suicidal in the early phase of treatment for depression and these individuals need to be monitored closely. The warning does not advise against the use of antidepressants for approved indications like depressive and anxiety disorders.

What are the warning signs of suicide?

You cannot always tell that when a loved one is considering suicide. However the warning signals are evident most of the time: Talking about suicide all the time, stacking sleeping pills, withdrawing from social contact and wanting to be left alone, having mood swings, being preoccupied with death, dying, or violence, etc. Increasing the use of alcohol and drugs, doing risky or self-destructive things like self-harm, or driving recklessly, saying goodbye to people as if they won’t see again.

What to do if your friend, relative, or acquaintance has suicidal ideas?

How to nurture good mental health?

As much as we look after our physical, financial, social, and personal health, looking after our mental health is extremely important. If your mind is healthy, you can achieve success in life. Being positive at all times, appreciating others for their success and glory, having great friends and being happy in what you have achieved so far is important. Work hard for your mind, body, and society. If you feel depressed or suicidal, see a psychiatrist as early as possible. There are very effective medications available for all mental disorders and they would certainly be of benefit to you. Remember, having a mental illness like anxiety, depression or paranoid ideas is not madness See a psychiatrist, he is the best person to help you.

What to doff you have signs of suicidal behavior?

Do not play it down or ignore the situation. Many people who commit suicide, have had expressed the intention at some point. The safety of your friend or relative is important. Please act swiftly and help him to prevent suicide. Many a time, suicide is a perceived solution to physical, mental, emotional, and environmental situations that are thought to be unresolvable. The key to hope is to help educate people that suicide is a permanent solution to a temporary problem. We must ask the uncomfortable question, “Are you thinking about suicide? “If you know someone with suicidal thoughts reach out and ask for helix There is hope. Relief comes through healing, not through death. Look after your mental health as well.