16 crore for a single dose of injection 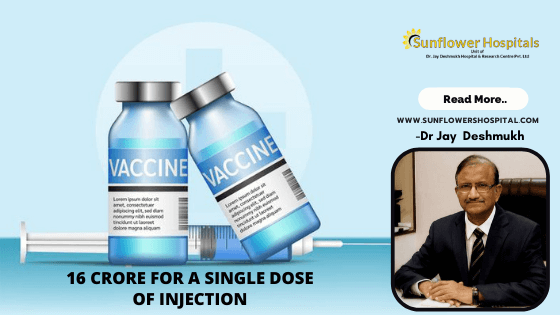 16 crore is the cost of one injection of gene therapy. This injection was recently given to a 14 months old baby from Bhatkal, in Karnataka. This is only the shot of life for babies with a neurological condition known as Spinal Muscular Atrophy. Last month the therapy Zolgensma was given as an intravenous infusion for over an hour. The baby was a lucky winner of a lottery through a compassionate access programme.

What is gene therapy?

This involves altering the genes inside your body’s cells in an effort to treat or stop diseases. Genes contain your DNA. This is a code that controls much of your body’s form and function. Genes that do not function properly can cause disease.

How is it done?

Gene therapy replaces a faulty gene or adds a new gene in an attempt to cure disease or improve your body’s ability to fight disease. Researchers are still studying how and when to use gene therapy. Gene therapy is available only as a part of a clinical trial.

Which particular diseases are likely to be cured or treated in the near Mute?

As it is being used for Spinal Muscular Atrophy in infants and is approved by Food and Drug Administration for the same, it holds promise for treating a wide range of diseases like cancer, heart diseases, diabetes, haemophilia, AIDS and cystic fibrosis. In the next 50 years, gene therapy is likely to be an important component of the treatment of many diseases.

Are there any risks involved in gene therapy?

A gene cannot be directly inserted into your cells. It is usually done by a carrier, known as a vector. The most important carrier for genes is a virus. The therapy can at times lead to an unwanted immune system reaction. It can target the wrong cells. The carrier virus can cause infections. If the new gene gets inserted in the wrong spot in your DNA, there is a chance that it can lead to a tumour. This whole process and research involve many scientists, modern technology and many animal experiments and of course many failures. Thus the high cost of gene therapy. What are the diseases under research for gene therapy? Single gene defects such as cystic fibrosis, haemophilia, muscular dystrophy, sickle cell anaemia, Huntington dis-ease, Parkinson disease, Gaucherie disease are a few examples where gene therapy may hold promise in the near future. There are certain diseases that involve many genes that function abnormally. These diseases include heart diseases, cancer, diabetes, schizophrenia and Alzheimer’s disease. These are known as polygenetic disorders.

In the next five years which diseases are likely to get approval for gene therapy?

Gene therapy is the answer to many rare diseases and the light at the end of the tunnel for patients suffering from complex genetic disorders. The majority of gene therapies are being studied in clinical trials. Of gene therapies up for approval over the next five years, 45 % are anticipated to focus on cancer treatments and 38% are expected to treat rare inherited genetic disorders.

Which drugs have been approved recently as a part of gene therapy?

In 2019 Onasemnogene abeparvovec (Zolgensma) was approved for treating spinal muscular atrophy in children below two years of age. The price of the drug was the US $ 2.2 million per dose, making it the most expensive meth-tine ever. Zynteglo was approved for beta Thalassemia for individuals 12 years of age and older.
Gene therapy is an important and exciting new approach. This is just making news. In future, this will be a commonly used word. Gene therapy will change the field of medicine from what it is today. The potential for treatment is limitless as scientists would discover more genes and their functions. The blueprint of our body is our genome. Our future health is locked in our genome. Our lives are likely to be changed forever as scientists try to understand our genome. Our fate is in our genes.